Lucy McRae is a body architect, she imagines ways to merge biology and technology in our own bodies. She works on technology and human body merging that can be normal in the future. Her designs vary from clothes that recreate the body’s insides, to a pill when swallowed, lets you sweat perfume.

She calls herself a body architect. She trained in classical ballet and has a background in architecture and fashion. As a body architect, she explores how we can transform the human body. When she worked at Philips Electronics in the far-future design research lab, looking into futuristic designs. She explored the human skin, and how technology could transform the body. She worked on concepts like an electronic tattoo, which is augmented by touch, or dresses that blushed and shivered with light. She started her own experiments that were the low-tech approaches to the high-tech designs she was having. She stuck Q-tips to her roommate with wig glue. She started a collaboration with her friend, and used themselves as models. They transformed her apartment into their laboratory, and worked in a very spontaneous and immediate way. They were creating visual imagery provoking human evolution. 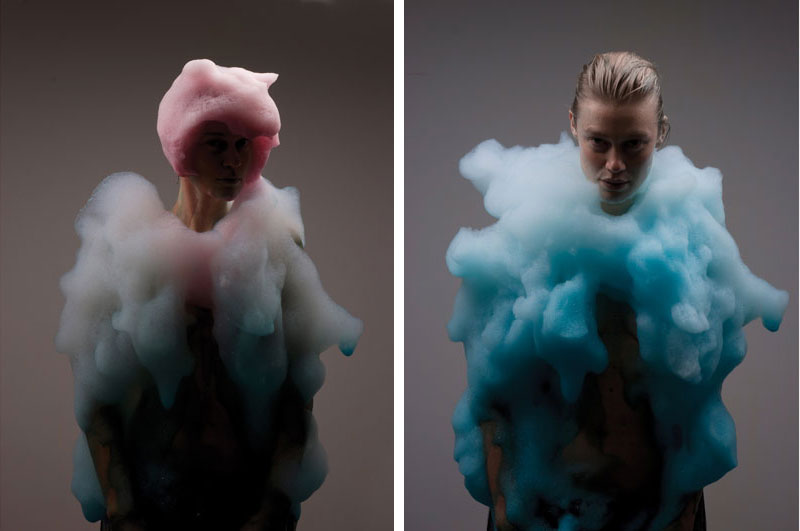 Whilst she was at Philips, they discussed this idea of a “maybe technology”, something that wasn't either switched on or off, but in between. A maybe that could take the form of a gas or a liquid. And she became obsessed with this idea of blurring the perimeter of the body, so you couldn't see where the skin ended and the near environment started. They set up a studio in the red-light district and began their experiments. They wrapped themselves in plumbing tubing, and found a way to redefine the skin and create a dynamic textile. She was introduced to Robyn, the Swedish pop star, and she was also exploring how technology coexists with raw human emotion. And they talked about how technology with these new feathers, this new face paint, this punk, the way that we identify with the world, and made a music video. The idea of what happens when you merge biology with technology is fascinating, and so is this idea of being able to reprogram biology, in the future, away from disease and aging. Imagine if we could reprogram our own body odor, modify and biologically enhance it. And how would that change the way that we communicate with each other? And would we revert back to being more like animals, have more primal modes of communication? She worked with a synthetic biologist, and created a swallowable perfume. It is a cosmetic pill that you eat and the fragrance comes out through the skin's surface when you perspire. It completely blows apart the way that perfume is, and provides a whole new format. It's perfume coming from the inside out. It redefines the role of skin, and our bodies become an atomizer. She learned that there's no boundaries, and if we looked at the evolution of her work, we could see threads and connections that make sense. But when she looked towards the future, the next project is always completely unknown and wide open.

The new idea could come from any conversations and any experiences that connected the dots, and they instinctively appear. As a body architect, she has created this limitless and boundless platform for anyone to discover whatever they want, and feels that she just got started.