When deforming force is applied on the body, the configuration of the body changes .The change in configuration to the original configuration is known as strain. This note provides us an information on Strain and hook's Law

It has no unit since it is the ratio of same physical quantity.

Depending upon length or volume or shape of the body has changed, there are different types of strain. They are:

Hooke’s law:
Robert Hooke studied the elastic behavior of some material like coiled spring, metallic wires, metallic rods, etc. and summed up the findings in the form of rule known as Hooke’s law. Hooke’s law states that within the elastic limit, stress developed is directly proportional to strain produced.

where ‘E’ is the proportionality constant called modulus of elasticity

Consider a spring of length ‘L’ suspended from a rigid support as shown in the figure (i). The spring carries a pan at its lower end so that it can be loaded with different loads. A pointer ‘P’ slides over a vertical scale which gives the position of the spring.

Load is placed on the pan in the steps of 0.5 kg and corresponding readings of the pointer are noted. The difference between these readings with the initial reading gives the extension produced in the spring due to various loads.

When the graph is plotted between different loads or weights and corresponding extensions, a straight line passing through origin is obtained. This indicates that load is directly proportional to extension.

Where k is a constant quantity

Dividing both sides by cross-sectional area of the surface

where k, L and e are constant.

When a graph is plotted between stress and strain for a metallic wire, stress is directly proportional up to point A and it obeys Hooke’s law. The point ‘A’ is called proportional limit. If stress is increased beyond A up to point B, large strain is less and the wire can regain its original shape and size after the removal of load but Hooke’s law is not obeyed between A and B. The point B is called elastic limit. If stress is increased beyond point B up to C, the wire does not regain its original length and there is permanent set equal to OO’ as shown in the figure. The wire shows both nature, elastic and plastic in between B and C. If stress is increased further beyond C, the strain produced is more up to point D and point D is called breaking point. Beyond D, slight increase in stress can cause the wire to break.

The ratio of change in length to the original length produced under the action of deforming force is called longitudinal strain.

The ratio of change in length to the original length produced under the action of deforming force is called longitudinal strain.

It is the angle through which originally perpendicular plane shifts when tangential deforming force is applied is called shear strain.

Elastic limit is the upper limit of the deforming force up to which the body can regain its original shape and size completely.

Hooke’s law states that within the elastic limit, stress developed is directly proportional to strain produced.

Videos for Strain and hooke's Law 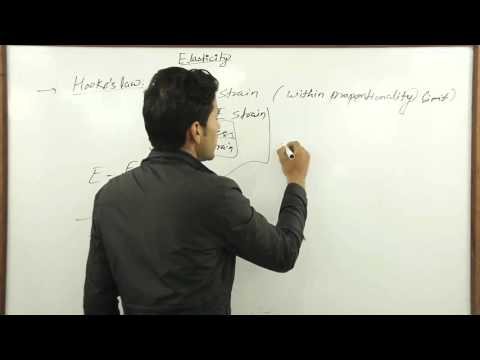