According to the Newton’s law of gravitation,

The force between them is

where G is a constant of proportionality called the universal gravitational constant.

Thus, universal gravitational constant, G equivalent to the force of attraction between two bodies each of mass unity and a unit distance apart. Its value is 6.67 ×10-11 Nm2 kg-2, which indicates that gravitational force is very weak.

The gravitational force is independent of the intervening medium between the bodies. It follows the Newton’s third law of motion. For example, when a body A exerts a force on another body B, the body B also exerts the force A of the same magnitude but in opposite direction.

Gravitation is the force of attraction between any two bodies in the universe where as gravity is the force due to earth on a body lying on or near the surface of the earth.

Acceleration due to Gravity

If an object is left from a height on the earth, it will accelerate towards the earth’s surface produces acceleration on it. The acceleration produced on an object due to earth’s gravity is called acceleration due to gravity and is denoted by g.

Relation between g and G

Consider an object of mass n lying on the surface of the earth as in the figure. Let M be the mass of the earth and R its radius. We can suppose that the earth is a sphere and its mass of concentrated at its centre. From Newton’s law of gravitation, the force of attraction between the earth and object is

Mass and Density of the Earth

where G is a constant of proportionality called the universal gravitational constant.

Videos for Newton's Law of Gravitation 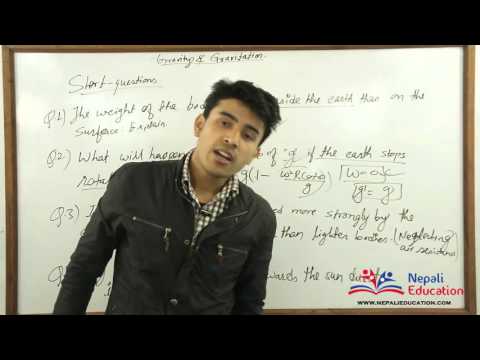