According to the old view, a surface is seen smooth to the naked eye has many irregularities when seen through a microscope as shown in the figure. If two surfaces come in contact, there is interlocking between irregularities and force is required to break it. This force measures the force of friction.

When two surfaces come in contact, the actual microscopic area of contact is much less and the molecules at these points come so close to each other that a strong intermolecular force acts on each other. So a force is required to break it. When the normal reaction increases, the area of contact also increases. That is why the force of friction also increases.

When a block is resting on a horizontal surface, the block presses the surface due to its weight mg. The surface pushes up on the body with a force perpendicular to the surface called normal reaction. If we apply a small horizontal force F on the block, it does not move. If we go on increasing the force, the block remains at rest till to certain magnitude of the force and then, starts to slide. The friction of friction between two surfaces when the body is in static condition is called static friction. The maximum value of static friction is called limiting friction.

Initially, it requires more force to break the interlock between the irregularities of two surfaces. But once the block is in motion, it takes the time to interlock between the irregularities of two surfaces. The body gain inertia of motion. So the force of friction is reduced. The force of friction when block is sliding is called kinetic or dynamic friction. For a limiting speed, the kinetic friction remains constant throughout the motion. Kinetic friction is always less than limiting friction.

The opposing force that comes into play when one body id actually rolling over the surface of the other body is called rolling friction. For example, when a wheel or a circular disc or a ring or a sphere or a cylinder rolls over a surface, the force that opposes it is the rolling friction.

Following are the laws of the friction:

Let a body be at rest on a horizontal table as shown in the figure. When a force Fa is applied to it horizontally, the body just begins to slide along the surface. From the laws of friction, the force of friction F is proportional to the normal reaction R.

where µ is a constant of proportionality called coefficient of friction between two surfaces in contact.

The coefficient of friction is the ratio of friction force to the normal reaction. It is a unitless quantity and its value depends on the material of the objects. If the object is in the motion, it is then we replace F by Fk and µ by µk. So equation (i) becomes

Static Friction is a Self-Adjusting Force

The force of friction when block is sliding is called kinetic or dynamic friction.

The opposing force that comes into play when one body is actually sliding over the surface of another body is called sliding friction.

The opposing force that come into play when one body id actually rolling over the surface of the other body is called rolling friction. 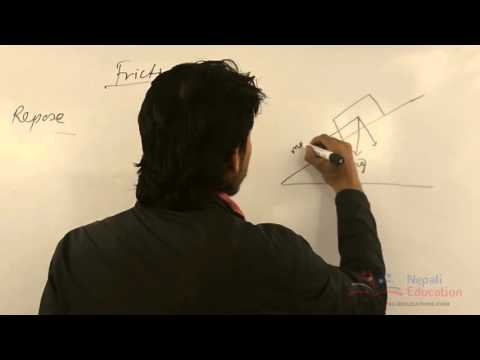 Angle Of Friction And Angle Of Repose