Heat engines can be divided into two classes:

The petrol engine is called Otto engine because it was developed by Otto in 1876. This engine consists of a cylinder fitted with the piston. The cylinder is provided with the inlet valve I and outlet valve O. the opening and closing of these valves are controlled by the motion of the piston. It is four strokes internal combustion engines and uses a mixture of petrol and air (98% air and 2% petrol vapour) as the working substance. The working of the petrol engine may describe in the following steps:

Otto-cycle on a P-V Diagram

Merits and Demerits of Petrol Engine

Petrol engine is very suitable for use in cars, scooters and aero planes because its size is small and light in weight. Its efficiency is quite high as compared to that of the steam engine. This engine is practically smokeless.

Petrol is expensive and so does the running of this engine. Due to the explosion of petrol vapour, there is always a risk of fire and petrol engine is unreliable due to occasional failure of the spark plug.

a,  Heat engines can be divided into two classes:

b,  The petrol engine is called Otto engine because it was developed by Otto in 1876  .

c, Petrol is expensive and so does the running of this engine 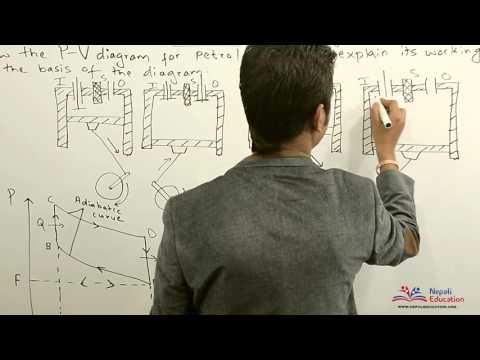