Determine the thermal Conductivity of the Substance by using Searle's Method

It consists of a metallic rod having two gaps is known as the distance of separation. The rod is heated by circulating stem and next is cooled by circulating cold water. Two thermometers 'T3' and 'T4' are placed at inlet and outlet of water and next two thermometers'T' and 'T1' and 'T'2' are placed in the gaps of the rod. Mercury is placed in the gaps for the proper transfer of heat to the thermometer. The wool is surrounded by wool or fur such that the rod avoids the loss of heat.

When the temperature shown by the thermometers 'T1', 'T2', 'T3' and 'T4' becomes constant then the following observations are taken.

Distance between the holes of the metallic rod = x

Cross-sectional area of the metallic rod = A

Then, the quantity of heat transferred to the rod in time 't' second is

Consider a heat of source 's'. Let the source of heat radiation(θ) per second in all directions.

Dividing equation (i) by (ii)

Dividing both sides by Q, we get

and \(t = \frac {T}{Q}\), transmittance or transmission coefficient of the surface.

Absorptance is the ratio of heat energy absorbed by the surface to the total heat energy incident on it at the same time.

Absorptance is the ratio of heat energy absorbed by the surface to the total heat energy incident on it in the same time.

Transmittance is the ratio of heat energy transmitted by the surface to the total heat energy incident on it in same time.

Videos for Thermal Conductivity by Searle's Method and Heat Radiation 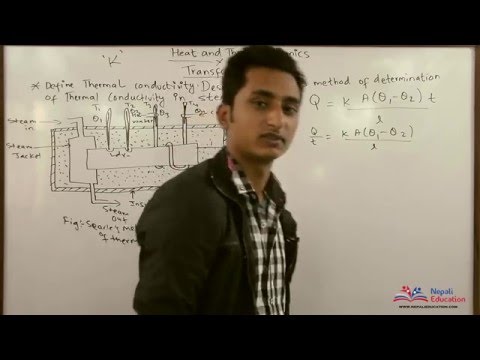