The general process of acquiring culture is known as socialization. It is the process through which younger generation learns. Socialization also means going out and meeting people or hanging out with friends.It is the process, with the help of which living organism is changed into a social being. It is the process by which individuals gain knowledge, basic skills, values, beliefs, behavior and the certain character that enable a child to participate as an effective member of groups and society.

Representative and Process of Socialization

Representative causes something to occur. They are also a member that influences another capacity/ ability. Socialization occurs throughout our life. So, the representative of socialization can be individuals, groups, institutions, places, events or situations . The representative of socialization may be family, school, peer-group and mass media. Socialization is the process learned by an individual. It is not something which individual gets by birth. Human infants are born without any culture. They must be transformed by their parents, teachers, and others into the culture and socially adopted animals. Socialization occurs, first in the family. For example, your parents might ask you to do "Namaste" when the elder people come in your house or you might be instructed to take off your shoes while entering the room.

We also learn many things from our friends, media, books, newspapers, and magazines.Everything that we learn from our family, teachers and friends help us to adapt ourselves to our society throughout our life.
Every society is faced with the necessity of making a responsible member out of each child born into it. The child must learn the expectation of the society. The individual learns the reciprocal responses of the society. Socialization is the process by which human begin to acquire the skills necessary to perform as a functioning member of their society. It represents the whole process of learning throughout the life course and is a central influence on the behavior, beliefs and actions of adults as well as of children. It is the process of adjustment in particular culture, family, religion and community. It helps a person to participate in social groups and society. It helps in the stable functioning of society and community. 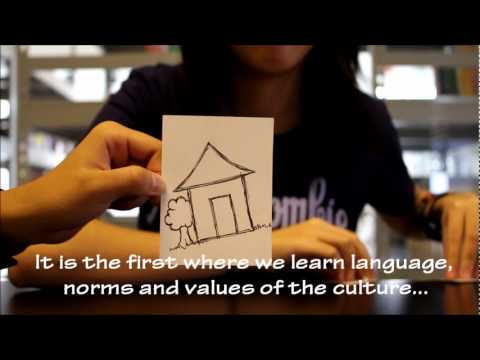 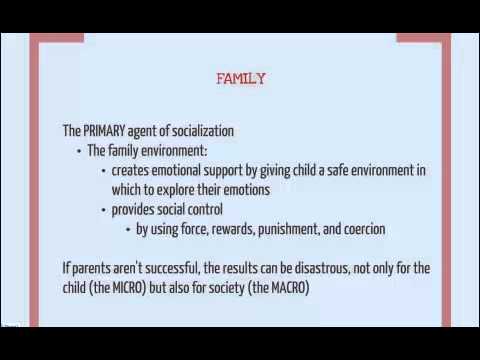 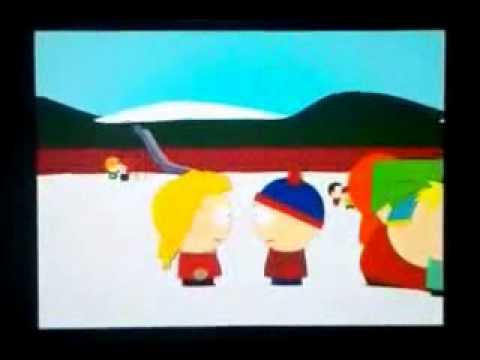 The general process of acquiring culture is referred to as socialization. It is the process with the help of which living organism is changed into a social being. It is the process through which the younger generation learns. It is the interactive process by which individuals acquire knowledge, basic skills, values, beliefs, behaviour and certain character traits that enable a child to participate as effective members of groups and society.

What are representatives of socialization?

There are mainly four representatives of socialization. They are family, school, peer-group and mass media.

How does socialization occur?

What role does family play in Socialization of a child?

Family is usually considered to be the most important representative of Socialization. Our parents or those who play the parent role are responsible for teaching us to function to the right path. The behaviour of a child depends on, which class the child belongs. The children learn most of the things from the family. So family plays an important role in the socialization of a child.

How does school help in Socialization of a child?

The next important representative of child socialization is the school.Children learn to be sucessful, learn to be quiet, to wait and sometimes to act interested even he is.A child also learns many things from school, he learn how to respect the old, feeble and the youngers.Children learn knowledge for the continuation of one's life from the school.So, in this way school help in Socialization of a child.

Mention any three things you have learned from your friends?

The three things I have learned from friends are as follows:

Why is Socialization important?

What do you mean by peer ?

The people who are the same age as you or who have the same status as you is known as peer.

What are the primary agents of socialization ?

Family, school and friends are the primary agents of socialization.

What do you mean by an agent ?

Who plays very important role in the socialization of child ?

A family plays very important role in the socialization of child.

What are the things  that include in mass media ?

Write down any four main primary agents of socialization?

Any four main primary agents of socialization are family, school, peer-group and media.